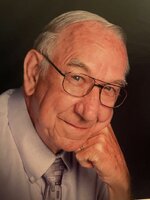 Harold E. Shaulis, 85, of Somerset, PA, went home to be with his Lord and Savior on Friday afternoon, April 22, 2022 at UPMC Somerset Hospital.  Born in Friedens, he was the son of the late William H. and Lissie P. Meyers Shaulis.  He was the husband of Nancy K. Lambert Shaulis for 63 years on February 15.

A 1955 graduate of Somerset High School, Harold was an active and faithful member of Geiger Church of the Brethren where he served as a Sunday school superintendent for 25 years, deacon, chairman of the church board, and Sunday school teacher for many years.  During the Vietnam War, he served in the United States Army as a military policeman at Fort Lewis, WA.

Harold was a member of American Legion, Post #181 in Somerset.  In addition to woodworking and bowling, he enjoyed restoring a 1970 Thunderbird.

A funeral service will be held on Tuesday morning, April 26, 2022 at 11:00 AM at Geiger Church of the Brethren, 185 Culligan Road, Friedens, PA 15541.  Interment will follow at Somerset Memorial Park.  The family will receive guests at the church on Monday from 2:00 – 4:00 pm and 6:00 – 8:00 pm and on Tuesday morning from 10:00 am until the time of the service.  Please omit flowers.  If desired, contributions may be made in his memory to the memorial fund of Geiger Church of the Brethren.  To express a condolence with the family or to watch a webcast of the service beginning Wednesday, visit www.spencefuneralservices.com.