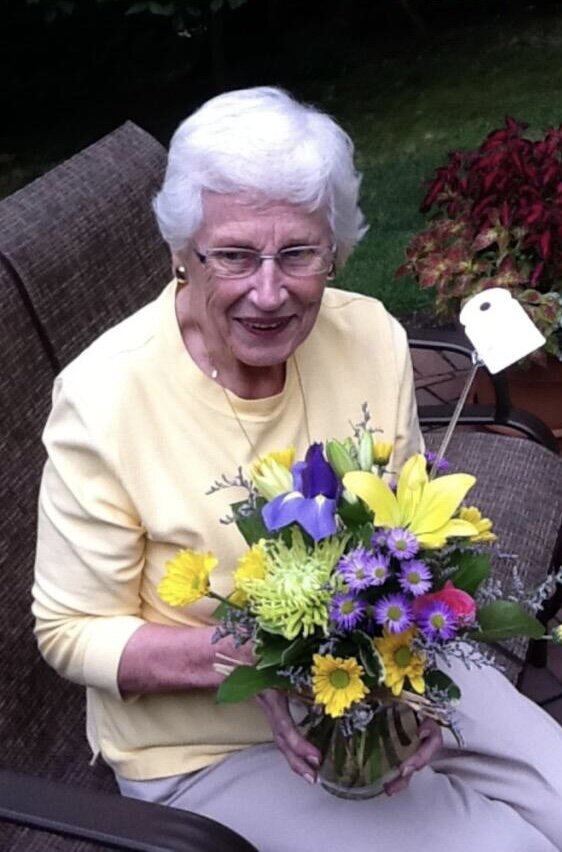 Obituary of Shirley A. Engle

Shirley was born on July 24, 1928 to J. Arthur and Harriet Swarr, the oldest of five children. She graduated from East Hempfield Township High School in 1947. A year later Shirley married Charles ("Charlie") R Engle at Donegal Presbyterian Church. Charlie's humor and lightheartedness complemented Shirley's no-nonsense and practical attitude, a partnership that sustained their marriage of 47 years and the raising of two daughters. Shirley was a supportive wife, loving mother, grandmother and great-grandmother and a meticulous homemaker.

Shirley created wonderful traditions for her family including the baking of thin buttery sand tarts each Christmas, her grandson’s favorite orange fruit salad and her annual canning of piccalilli.

Shirley had an eye for beauty and found ways of integrating it in her daily life. She had an interest in fashion; as a teenager and young adult she kept detailed scrapbooks of the young Queen Elizabeth's wardrobe and in Shirley’s later years she enjoyed working in a women's clothing boutique. Shirley was an avid reader. She enjoyed a good cup of coffee, listening to piano music and regular visits with her sisters, family and friends.

Shirley is survived by her daughters, Brenda Evanko (Michael) of Elizabethtown, PA and D. Jean Hallem of Lexington, MA, a grandson, Michael J Evanko of Easton, PA, a granddaughter, Jennifer Echemendia (Michael) of Crozet, VA, three great-grandsons, Michael-Bodey, Ian and Gabriel Echemendia of Crozet, VA, sisters Helen Cope (John D) of Grantham, PA, and Sara Jane Blanck of Lancaster PA, and a brother, Larry Swarr (Jan) of Lancaster, PA. She is preceded in death by her husband and a brother, Donald Swarr.

A private interment will be held at Fort Indiantown Gap in Annville, PA. There will be no public viewing. Contributions in Shirley's memory may be made to Masonic Village Hospice and mailed to Masonic Villages, Office of Gift Planning, One Masonic Drive, Elizabethtown, PA 17022.

Memories and condolences may be shared at www.spencefuneralservices.com

Share Your Memory of
Shirley
Upload Your Memory View All Memories
Be the first to upload a memory!
Share A Memory