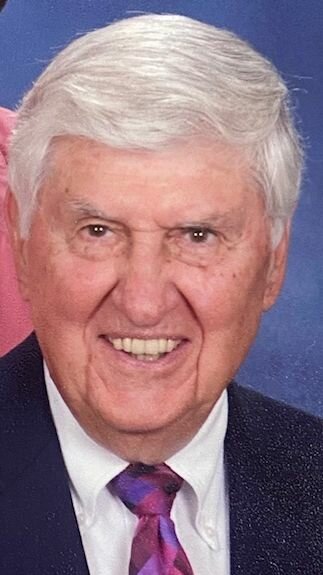 10:30 am - 11:30 am
Lancaster Church of the Brethren
1601 Sunset Avenue
Lancaster, Pennsylvania, United States

J. Calvin Wenger, DC, 88, passed away peacefully surrounded by his loving family and was welcomed into his eternal home on August 24, 2022, in the ICU at UPMC Lititz. Calvin was born on 10/1/1933 to S G and Mary Wenger in Monterey, PA. He lived his early life in Manheim, PA. His sister, S Joan, was born while the family lived in Manheim. The family moved to Lancaster City in 1943 and Calvin attended J.P. McCaskey High School, where he played basketball and graduated in 1951. He went to Franklin & Marshall College for pre-med from 1951-1953. He then attended Palmer College of Chiropractic in Davenport, Iowa, where he graduated in 1956 as a fellow with honors and returned to Lancaster and joined his father in practice at the Wenger Chiropractic Clinic/Group, Lancaster. Calvin continued to practice for 60 years, building deep and lasting relationships with his patients, and touching a myriad of people before retiring in 2016 from Wenger Chiropractic Group. Calvin was also ordained as a minister of the Church of the Brethren in 1979 and served the Lancaster Church of the Brethren as Assistant Pastor, Moderator, Pastor of Caregiving, Sunday School teacher, deacon, usher, greeter and jack of all trades until his retirement in December 2021. He was a Judge of Elections for several decades in Southern Manheim Twp, Lancaster and later, in Penn Township, Manheim. He was active in Toastmasters International/Speakers Bureau from 1955 through 2010. He spoke to hundreds of groups during that time. He was on the Board of Directors for Pleasant View Retirement Community in Manheim for many years and served as Board President from 1993-2012. He was very humbled in 2012 when the Board of Directors decided to name the new wellness and health care facility at Pleasant View in his honor.

Calvin met the love of his life, Shirley Boose, at Lancaster Church of the Brethren in 1943. They dated off and on through high school and were married in September 1954 and would have been married 68 years on September 12th. They moved to Davenport while he attended Palmer College of Chiropractic. Their daughter, Linda, was born in Davenport in 1956, shortly before they returned to Lancaster. Their son, David, was born one year later and son, Bob, followed three years after that. Although he was always very busy, Calvin held family close to his heart. He enjoyed family meals, reunions, and vacations to the beach. Calvin and Shirley went on several cruises and drove to the West Coast twice, following first a northern route and then a southern route.

The family would like to thank the physicians, physician assistants, residents, nurses, respiratory technicians and patient care assistants in the ER and ICU at UPMC Lititz for the wonderful and loving care they provided during Calvin’s eight-day illness.

In lieu of flowers, please consider making a contribution to any of the following: Lancaster Church of the Brethren, 1601 Sunset Ave, Lancaster, PA 17601; Pleasant View Communities, 544 N Penryn Rd, Manheim, PA 17545; Heifer International, 1 World Ave, Little Rock, AR 72202; Blessings of Hope, 500 Becker Rd, Leola, PA 17540. Cremation arrangements were made through William Spence Funeral and Cremation Services, Manheim. Burial will be private and at the convenience of the family.

Share Your Memory of
J. Calvin
Upload Your Memory View All Memories
Be the first to upload a memory!
Share A Memory